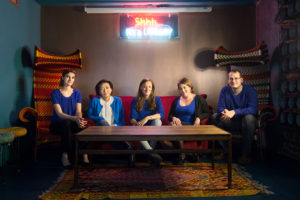 Taking communication, collaboration and experimentation as the basis to grow as a group, Ceruleo create dramatic programmes using spoken text alongside music for two sopranos and continuo. Every member of the group performs as a soloist, and Ceruleo use all available combinations of instruments and voices to create innovative and captivating performances.

Ceruleo formed in 2014 at The Guildhall School, and were subsequently invited to be Artist Fellows there for 2016/17.  They were Brighton Early Music Festival’s Early Music Live! scheme participants during 2015/16.

Ceruleo have performed across the UK and abroad. Most recently, their Arts Council England funded ‘Burying the Dead‘, a staged show about Henry Purcell written by the scriptwriter Clare Norburn and directed by Thomas Guthrie, began in May 2018. They have performed at Festivals including the Stroud Green Early Music Festival, Buxton International Festival, Lake District Summer Music, Baroque at the Edge at LSO St Luke’s, Brighton Early Music Festival and the York Early Music Christmas Festival.

Ceruleo were honoured to receive a grant from Arts Council England’s Covid Emergency Response Fund which has enabled them to produce a video series  about Burying the Dead, in which members of Ceruleo talk to the creative team as well as Niall Ashdown, who played Henry Purcell. They look at what went in to making the show as well as their favourite parts of it. They will be premiering the whole show on line later in the summer. To find out more, please go to their website www.ceruleo.co.uk where you can sign up to their mailing list.

Ceruleo were part of Surbiton Salons last year and are delighted to be a part of this online series.