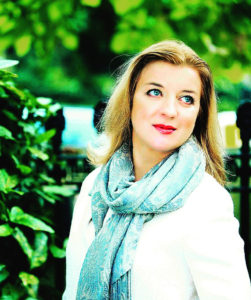 Russian-Lithuanian pianist Jelena Makarova (Piano) first graduated from the Lithuanian Academy of Music and Theatre receiving her Master’s Degree in Piano Performance, Accompaniment and Piano teaching. She then moved to the UK and continued her studies at the Royal Academy of Music, where she studied piano with Colin Stone and chamber music with Michael Dussek and Nicola Eimer. Jelena was supported by the Kathleen Trust. She graduated from the academy obtaining her Postgraduate Diploma in Piano Performance.

Jelena has been performing in recitals and festivals in the USA, UK, Russia, Austria, Lithuania and Sweden at the world’s finest concert venues such as Carnegie Hall, Mozart Konzerthaus in Vienna, St. George’s Hall in Bristol, Purcell Room, St. James’s Piccadilly and St. Martin-in-the-Fields, where she performed for the ‘Pianists of the World’ series, ILAMS society concerts and New Music series.

Jelena is a very versatile musician. Along a repertoire of a more traditional nature she also actively promotes New Music. She has been collaborating with and performed music by established living composers such as Causton, Wallen, Kurtág, Riley, Weiner, Woolrich, Turnage as well as young emerging composers.

She performed at St. John’s Smith Square with the National Youth Wind Orchestra of Great Britain for the orchestra’s 40th Anniversary Concert, which included World Premiere of ‘’Guilded Theatre’’ by Kenneth Hesketh. Jelena was also a pianist for collaborative projects with New London Orchestra, Baltic Art Form and Gallery Singers.

She is a co-founding member of Trio Sonorité with Canadian-American cellist Daryl Giuliano and Turkish clarinettist Özlem Çelik. The trio recently performed live on Women’s Radio Station as part of the Classic Women Future Awards.

Jelena is also a pianist for the Ethel Smyth Piano Trio and an ongoing project with soprano Jessica Summers called ‘Living Songs’ which includes incorporating songs written in the 20th and 21st century into recital programmes and performing them along more well-known repertoire.

As an educator she is employed by Tower Hamlets Arts and Music Educational Services (THAMES). Her other educational work includes outreach projects run by Royal Ballet School and Drake Music.

For more information about Jelena, please visit her website: www.jelenamakarova.com