The Beat Goes On

Stomping, clapping, slapping and everything in between – this dynamic, high energy workshop will explore the use of the body as a percussive and vocal instrument.

The session will feature a range of rhythmic warm ups, Afro-Brazilian grooves and vocal / percussive routines. Led by ex-STOMP cast member Alua Nascimento (Beat Goes On), this will be an invigorating workshop suitable for all, regardless of prior musical experience. 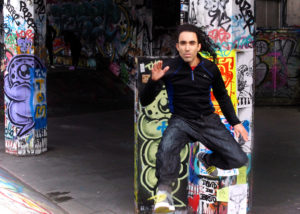 Alua Nascimento, an ex-member of STOMP,  is a multi-instrumentalist, music teacher and performer who studied popular Brazilian percussion and vibraphone at Free Music University of Sao Paulo and classical percussion at Sao Paulo’s Municipal School of Music.

His first public performance was at the age of 8, having learnt percussion from his father, the renowned percussionist Dinho Nascimento.

Based in London since 2006, he is currently doing workshops of Body Percussion and Drumming all over the UK.

2019  Played with Raul de Souza at the Lille Choro Festival.

2018 With Beat Goes On, did a Body Percussion workshop at the Love Supreme Jazz Festival.

2017  With Karawana, an international group, he toured Poland.

2014 – 2016 As a cast member of STOMP, he performed daily at the Ambassadors Theatre in London.

2014 Worked for ARK Schools, teaching samba drumming and body percussion at the Ark Bentworth and the Ark Oval Primary Academies.

2013 Toured around Europe with Sam Lee, the winner of 2011 Arts Foundation Awards.

2012 With Festive Road, an arts company based in Milton Keynes, he toured around the UK with the show “Brewing UP”.

2010 With the band Peyoti for President, he toured around Europe, playing in Festivals such as Przystanek Woodstock in Poland and Sfinks Festival in Belgium.

2009 With The Roundhouse, he led workshops of drumming and percussion at The Big Chill Festival creating the Junk Orchestra.

2006  Played a concert with The Wauras, an indigenous tribe from Xingu, a National Park in Brazil.

2002 – 2006 Was the co-ordinator of the Arts Factory, an experimental arts lab which promoted the fusion of avant garde and folk art in Sao Paulo.

2001 As a member of the Interkunst, an international group based in Berlin, he worked as a musician, teacher, composer, arranger and capoeirist, running workshops of African Percussion, Body Percussion and Capoeira in schools, universities, prisons and youth centres in Germany, Austria, Italy, Poland and Holland.